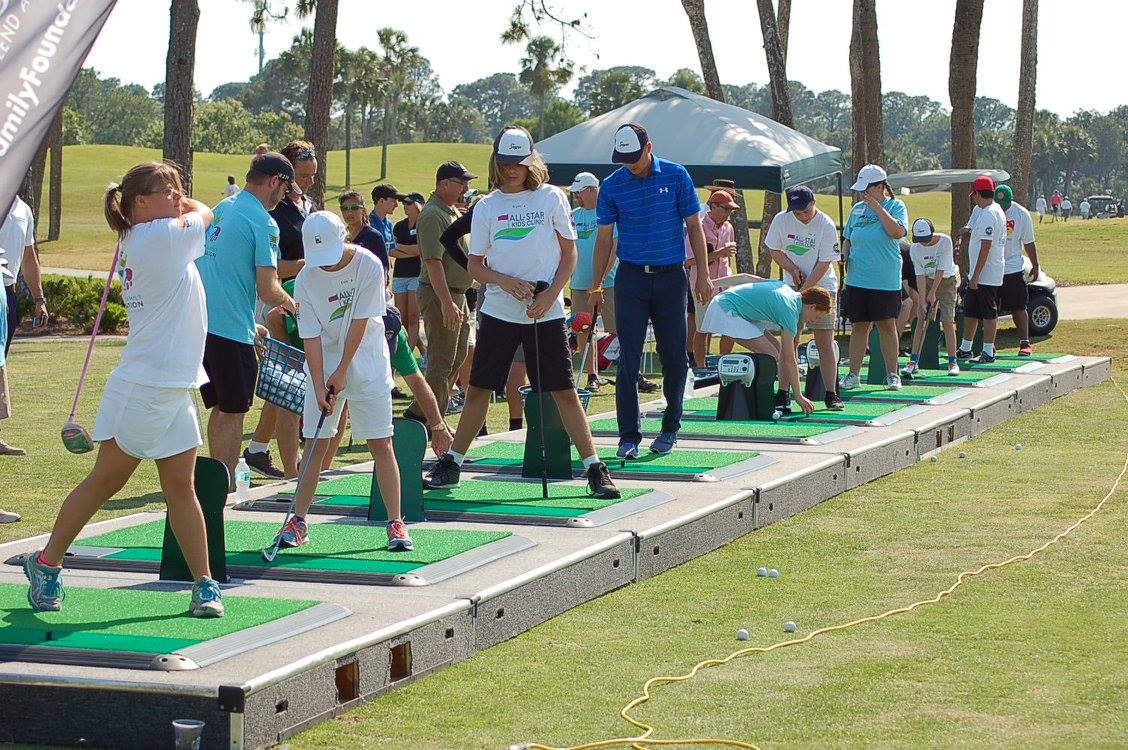 For the second consecutive year, the Tesori Family Foundation hosted a group of local children with special needs and their families for a golf clinic at Sawgrass Country Club that included a special demonstration from PGA Tour player Jordan Spieth.

A field of 25 “VIPs” participated in the All-Star Kids Clinic, which was held May 10 on the eve of the opening round of THE PLAYERS Championship. A total of 175 people, including family members, volunteers, partners and sponsors, attended. Among the volunteers were coaches from The First Tee of North Florida and eight PGA Tour caddies, including Paul Tesori himself, who is the caddie for Webb Simpson and a former PGA Tour player and St. Augustine native.

“The joy that you young people bring – the happiness, the strength – is something so beautiful,” said Tesori at the beginning of the event. He and his wife Michelle, who now live in Nocatee, started the golf clinics for kids with special needs in 2014 after their son Isaiah was born with Down syndrome. Before Ponte Vedra, the clinics were held at the Grandover Resort in Greensboro, North Carolina, the site of the Wyndham Championship.

Spieth kicked off last week’s clinic by demonstrating the five main shots of golf: a hook, draw, straight shot, fade and slice. As he sent balls sailing high, low, left and right down the driving range, he discussed the pros and cons of the shots, as well as the strategies behind them.

Spieth, whose younger sister Ellie has learning disabilities, seemed to enjoy himself just as much as the kids. At one point, he turned to the crowd of children and asked which shot they wanted to see next. A girl pointed her finger high in the sky, which prompted the 23-year-old golf phenom to shoot a vertical bomber toward the clouds, eliciting “oohs” and “ahs” from the kids.

“If there’s any way that any of us can bring more happiness to our already extremely smiling kids, then it’s a no brainer,” said Spieth about attending the clinic. “The happiness that’s displayed is second to none.”

After Spieth’s demonstration, the children were divided by age group and partnered with a coach for the evening. The groups proceeded to rotate through 15- to 20-minute sessions on putting, chipping and driving, which to the enjoyment of the kids, included using the automated ball teeing system known as Power Tee.

Following the clinic, the Tesoris presented awards and prizes to each of the participants and then sent them in golf carts to Sawgrass Beach Club, where they enjoyed an all-you-can-eat pizza party.

Ponte Vedra resident Van Kerner attended the event with her son Jack. She learned about the clinic last year after reading about it in the Recorder and wanted to make sure he could attend this year. Unfortunately, she remembered to sign up a bit too late and was added to the clinic’s waiting list, which typically is more than 30 kids deep. A slot opened for Jack, however, and he was able to attend after all.

“He’s been grinning from ear to ear,” said Kerner about her son. “He couldn’t wait until today. For him to feel like he can do something that everyone else does means a lot.”

Founded in 2009, the Tesori Family Foundation supports more than 20 local and national nonprofits throughout the year. In addition to supporting the special needs community, the foundation benefits the elderly and the homeless, as well as many other groups in need.

When Michelle Tesori took a moment to reflect on the clinic, a few tears streamed down her face as she remarked how glad she was to be wearing sunglasses on that particular day.

“I think the joy that we see here exemplifies everything that we get to experience every day with our child in ways that we had no idea our lives would be positively impacted when he was born,” she said.

“The most important thing is that the best way we can demonstrate Jesus’ love for us is by loving others,” she continued. “This clinic gives us the opportunity to do that for everyone.”