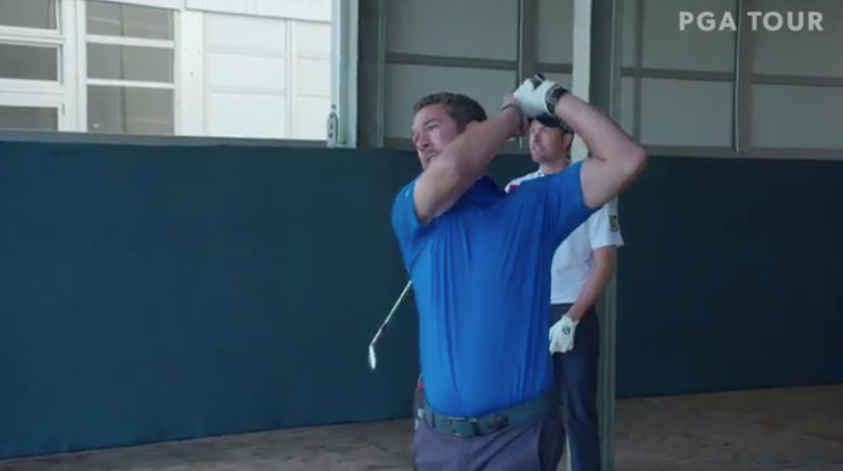 PONTE VEDRA BEACH, Fla. — Answered prayers. That’s how Paul Tesori sees it, and anyone who knows him knows that’s meant in the most literal sense of the words.

The highly-respected caddie was between jobs in the fall of 2010 after being let go — “Fired for the first time in my life,” Tesori said — by Sean O’Hair. He decided to take some time off to rest, regroup and weigh his options.

“The one thing I wanted to do was I wanted to find a relationship that I thought could be long term,” Tesori recalled. “All of my relationships on TOUR, all my caddie jobs, had lasted about three years and it was a lot of stress, obviously, involved.”

Soon afterwards, Dustin Johnson and Camillo Villegas came calling. Johnson, who is now the No. 1 player in the world, had already won four times while Villegas, a former Florida Gator like Tesori, had three victories. Both were great options for the veteran caddie.

Literally hours before Tesori planned to accept one of those offers, though, Webb Simpson called him. Simpson was two years removed from a standout career at Wake Forest and still finding his way as a pro. He was ranked a distant 213th in the world, while Johnson and Villegas were both among the top 30.

“After five minutes on the phone I knew this was the guy wanted to go work for,” he said.

Tesori liked the fire he heard in Simpson’s words as he talked about trying to get better. He liked that Simpson was a family man, too, about to become a father for the first time. And last but certainly not least, there was their shared religious conviction.

“I needed to take that leap of faith and go with a man that I respect,” said Tesori, who had been baptized in 2010. “Go with a man who loves the Lord. For me it was a faith-based decision, not a performance-based one.”

On paper, he’d be the first to admit, it made no sense at all. But the new partnership paid immediate dividends in 2011 as Simpson won twice, finished second three times and was No. 2 to Luke Donald in the FedExCup.

Long-term the team has continued to roll. Simpson has reached the TOUR Championship six of the last eight years and at No. 42 this season he’s got a good shot to get to the season finale at East Lake again. He’s won five times, including the 2012 U.S. Open, and banked nearly $30 million with Tesori on the bag.

One of the reasons the partnership works, Tesori said, is because Simpson gives him the freedom to be himself and speak his mind.

A year ago, for example, after Simpson tied for fifth at the RBC Heritage, Tesori remembers being anxious to get together the next day so he could talk to his boss about what had gone wrong that week and what they needed to do better. Two weeks later, Simpson won THE PLAYERS Championship, a title he defends this week.

“My perfectionism sometimes, maybe, you know, it could be a turnoff,” Tesori said. “But, see, Weber likes that part. He’ll call me out when I’m going too far.”

Interestingly, the two are vastly different in the way they play the game – which is another plus. Simpson is a feel player while Tesori, who got his amateur status back in 2016 and has won five times in the Florida State Golf Association Winter Series this year, is much more mechanical.

“I think if you get two guys that are very mechanically inclined, very intellectual, that way they can actually hurt each other,” Tesori said. “I think about the game in an analytical way, very mechanical way. He’s the exact opposite. He’s a painter — almost a magician.

“He sees everything outside the box and mentally, he doesn’t think much about mechanics. So, I think that part has been a good marriage as well.”

The final component is their shared faith in God. Tesori, who is 14 years older than Simpson, said the two often have “tremendous” conversations about their lives and how they can be better men, better fathers and better husbands.

They aren’t always so serious, of course. Tesori is a room-service kind of guy, ready to relax those aching muscles after a round, while Simpson prefers to have dinner with friends. But they often get together to watch a basketball game later – anything but talk golf.

“I definitely count him as one of my two closest friends in the world and that’s pretty cool to say, especially when that’s your boss as well,” Tesori said.

All in all, things have worked out better than he could have ever imagined.

“I tell everybody now he’s ruined me,” Tesori said. “I don’t think, I don’t think I could ever work for anybody else. I was pretty hardened and when I came to him, I could handle anything.

“But now I’m a big mush-pit. I’m all like sensitive now and stuff like that because he treats me so well, so I’m pretty much in trouble now if he ever decides to let me go. So, I guess I need to be on my best behavior.”

Tesori shared 18 unique facts about Simpson and their unique relationship together ahead of THE PLAYERS Championship this week at TPC Sawgrass.

1. Webb is incredibly well-respected on TOUR. When Jordan Spieth was on David Feherty’s show, he asked him for his favorite pairing and he said Webb Simpson. After Justin Thomas shot 62 in the final round of the WGC-Mexico Championship, he said that he loved playing with Webb and Pauly. His peers just really think a lot of him.

2. Webb is a very, very humble man — even the caddies know that. Joe Skovron, Rickie Fowler’s caddie, calls him “Unicorn” because you hear people like him exist, but you’ve never seen it. If I give him a bad read, he just says, “Paul, keep your head up. Stay positive.” Caddies are used to hearing the opposite.

3. He lives for Starbucks. He goes there for quiet time, but he sometimes ends up talking with complete strangers.

4. In fact, he loves coffee. Period. He even has a coffee weight scale at home. He weighs his beans so he knows exactly what he’s putting in there and scales his water, so he’ll have the exact same cup of coffee that he wants each morning.

5. He zones out on the golf course sometimes. We can be having a bad day and he’ll tell me, “That’s great, buddy.’”

6. He’s a covenant member of his church and faithfully attends Bible studies as well as family activities there. Oh, and he majored in religion at Wake Forest.

7. He let me take my filter off at the 2011 PLAYERS. They had split tees that day and we teed off the back. He birdied the first three holes and made a triple bogey on No. 13. He was saying something to me, and I just looked at him like, ‘Buddy, I just wish one time you guys would let us caddies take our filter off.’ He was like, ‘Why, what would you say?’ ‘Well, I’m not going to say it because I have to have my filter on.’ He goes, ‘Okay, I’ll let you take the filter off the rest of the day.’ I made fun of him all day. I think he made like five birdies and an eagle and shot like 75 so he gave me a lot of free ammunition. I just tortured him and when the round was over, he’s like, ‘I’m never, ever, ever letting you take the filter off again.’

8. He’s very wise. He’s got five children under the age of 8 so he has to manage his time very well.

9. He dresses really badly when he travels. One of my favorite stories is when we were going to Japan for the Dunlop Phoenix. When he landed, he was going to have to do a press conference and I don’t think he realized how quickly. The normal outfit for him will be like, a Lululemon navy tee shirt with really baggy black jogging pants. He’ll probably put some gray shoes on and then he has a San Francisco Giants baseball flat bill hat. He doesn’t care about the Giants but he likes the way it fits.

11. My nickname for him is Buhdro. When I started working for him, everybody called each other buddy. And so, we were just thinking about Louisiana bayou and we came up with Buhdro. Ted Scott, Bubba Watson’s caddy, says it should be spelled differently – Boudreaux — but we spell it our own way. I always call him Buhdro, and his kids call me Buhdro, He’s in my phone as Buhdro. I got him a journal, a leather covered journal, and it has Buhdro on it. And he just bought me a cover for our Masters yardage book and it has Buhdro inside it, as well. So that’s kind of our little thing instead of saying buddy or pal or friend or man or whatever.

12. He’s an amazing husband. He sends flowers to his wife, Dowdl when he is gone and plans date nights weekly when they are together.

13. He’s very good at showing his kids how important they are. He makes time for each one individually, as well as a family.

15. He’s a goofball. Everything about him is silly. We laugh at almost everything. We’ll be walking down the middle of the fairway and he’s leading the golf tournament and there will be a turtle over there. And he’ll go like, ‘Pauly, if I hit that turtle with a golf ball right now what do you think you would say?’ We both dance at home a lot and we’re terrible dancers. We love to tell jokes, too, dumb, corny jokes like, ‘Why did the chicken cross the road?’

16. He’s very generous – he gives 25 percent away and he pays his caddie well.

17. He is a mentor. He has four rookies on TOUR that he has dinner with at least once a month, every month. And they just go through what traveling on the road has been like, what either dating or marriage has been like, how family is doing, how golf is going, how’s your faith. That’s just something very, very intentional. He also has quite a few young men back home in Charlotte who are trying to play golf for living on the mini-tours and he brings him out to Quail Hollow to practice with him, an obviously spending time with his faith as well.

18. He loves making weird bets, like which one of us can hit a trash can with a golf ball.