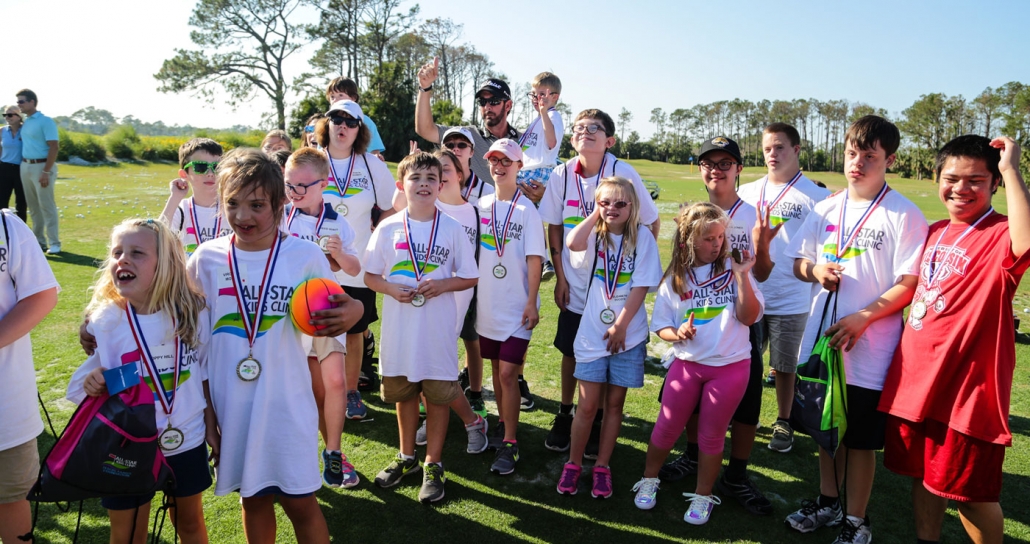 When you have this job as a reporter, you get to meet a lot of interesting people. My career has been no different. I’ve met a lot of different people, many with tremendous athletic talent, others with superior intellect. If you’ve read this column over the past three years you know my favorite thing is to write about those people. And I’ve been lucky. You’ve probably heard me say, “I’ve had breakfast with Muhammad Ali, beers with Arnold Palmer and Tony Trabert is one of my best friends” as a response to what kind of job I’ve had.

Some of you might already know Michelle and Paul Tesori. They call North Florida home. Both have been good athletes and successful in their careers but more than that, they are truly remarkable people.

Paul’s name might be familiar as a caddie on the PGA Tour for the past two decades. After earning his tour card as a player in 1996, Tesori could never find the rhythm of the lifestyle of being on the road. An accomplished player, Paul was a three-time All-American, and a part of the University of Florida’s National and SEC Championship teams in the early ‘90’s. Injuries, and missed cuts, forced him off the Tour after the ’99 season.

That’s when his caddie career got started. Having practiced with Vijay Singh, Singh asked him to come to a Tour event to look at his swing. That led to a ten-year caddie stint on Tour with Vijay, Jerry Kelly and Sean O’Hair.

Michelle met Paul in 2006 in Tampa, they were friends for a couple of years before they started dating in 2008. A good athlete herself as a top gymnast, Michelle took a softball to her nose her junior year of high school, shattering it. When it healed, she broke it again sliding into second base. That’ll give you a hint of the kind of tenacity she has. An exercise science major in college, Michelle is a certified personal/group exercise trainer. She worked for Major League Baseball, but much of her professional life was in non-profit

Dating for a couple of years, both Michelle and Paul saw their relationship start to deteriorate.

“We had a talk and decided to make a change,” Paul explained. “We said we were Christians, but we didn’t walk or talk that way. So, we were baptized in the summer of 2010.”

They figured their lives were on the way up, but the opposite happened. O’Hair fired Paul and he lost “every dime I ever made in the real estate crash.”

No money, no job and he and Michelle still living in the same house but not dating, Paul had a couple of offers and was about to confirm a job looping for a top player.

That’s when Webb Simpson called to offer Tesori a job.

“Michelle helped out, Googling ‘Who’s Webb Simpson,’” Paul said. “And even though he was new to the Tour, it seemed like the right thing to do.”

Since that pairing, Simpson has won the US Open and The Players Championship and more than $40 million in official earnings on Tour.

The connection between Simpson and Tesori through their faith has been well documented. But Paul says it’s more than that.

“I owe a lot to Webb. He’s showed me and taught me a lot. It could be called ‘intentionality in living.’ The way he acts, even just the way he talks to his wife. He lives it. I’ve seen him get up at four in the morning to spend a half hour in The Word before he even had a cup of coffee. Then go work out!”

Although they were married in 2011, Paul and Michelle had made a commitment to giving back three years earlier.

“Paul told me he’d seen top athletes really make a difference with their foundations and he wanted to give back the same way,” Michelle recalled.

“I’d done some community service when I played at Florida and continued after it wasn’t required,” Paul said. “I enjoyed it and I told Michelle I wanted to wait until the time was right to start some kind of foundation. But she’d have none of it. She flat out told me that was a cop out.”

“That’s right,” Michelle said. “I told him if you change one person’s life just one day, you’re on your way.”

“Sports gives us a platform and sometimes I don’t realize that because I’m a caddie,” Paul added. “It’s easy to minimize my impact.”

“He’d say, ‘I’m just a caddie,’” echoed Michelle. “I told him I thought that was the wrong way to look at it. Most people do this, and they don’t know what they’re doing at all. But they do it the right way.”

They started a foundation in 2009 with some of their own seed money, intending to just distribute it where they saw a need. They did some work with the Homeless Coalition in St. Augustine.

Their foundation started to get some attention when Simpson started playing well and there was plenty of media coverage of Webb and Paul’s tight friendship through their work and their faith.

“And when Isaiah was born, that was the final piece that fell in place,” Paul said.

Isaiah is Michelle and Paul’s son, born with Down Syndrome in 2014. Although Isaiah would be classified as “special needs,” Michelle says he has a “different arrangement of chromosomes. It’s not that he has an extra chromosome, it’s that the rest of us are missing one.”

From that attitude, the Tesori Family Foundation started the All-Star Kids Clinics in 2014.

“Sometimes being a parent of a kid who is different, you might not have some of the same experiences as other parents have,” Michelle explained about the genesis of the All-Star Clinics. “It’s a place where the kids and their parents feel like they belong. Nobody’s worried. It’s allowed us to freely love this awesome community that sometimes doesn’t feel like they get to have these experiences.”

If you’ve been to one of the handful of All-Star Clinics the Foundation has had locally, you know it’s the most joyful day of the year. There are big-name pros like Jordan Spieth giving a golf clinic and the All-Star kids following suit. Everybody’s smiling, laughing. And dancing. Dancing is a big part of the clinic.

“The good feeling is a side effect,” Michelle said with a laugh. “My face hurts after that day because everybody’s so happy that day. The All-Star clinic is for kids to just be. However, they are that day, that’s how we want them to be, and they’ll be loved unconditionally.”

Starting with one clinic at the suggestion of Mark Brazil, the tournament director of the Greater Greensboro Open, they’ve had a couple at Sawgrass Country Club during The Players but recently things have started to take off. A lot of the ‘no’s’ they were getting started turning into ‘yeses.’

“I was at an All-Star Kids Clinic at one of the other events I was visiting,” said Steve Jent, Executive Director of the Sanderson Farms Championship in Jackson, Mississippi. “I met Michelle and told her ‘We have to do this in Jackson!”

There really was no plan to expand the Clinics to other PGA Tour events but Jent saw a bigger picture.
“I thought it was amazing and so easy to do,” he explained. “This is a group in our community we’re probably not reaching out to and we can easily do this. And every tournament could do this as well.”

The Foundation created a playbook for hosts to hold All-Star Kid Clinics “And it kind of snowballed from there,” Jent said.

“We do this because it’s important to a part of our community and it’s just a blast to do,” he added. “A lot of tournaments have other things in place for charities in their communities, but they still add this. We all try to do certain things that make sense for each community in different ways. But this, It’s just the right thing to do.”

Minus Covid, the Foundation’s goal at the end of next year would be to have an All-Star Clinic at every stop on the PGA Tour.
“We love the involvement with the tournaments,” said Genna Lancaster, the Foundation’s Executive Director. “We want to expose our kids to the game, but they also have that extra excitement of being involved in something that’s happening in their city.”

They’re hoping for ten Clinics this year, all with special Covid protocols.

“Isiah and a lot of kids like him are ‘huggers.’” Michelle said. “So, it’s hard with what’s going on because you want to protect them. But we do what we need to do at every stop to keep everybody safe. “

“It’s a challenge to keep it to twenty-five kids,” Michelle lamented. “It keeps me up at night. We want to help everybody. We’re hoping to be the foundation of the growth and exposure to a game a lot of our kids would never know about.”

From just a simple clinic for kids and families who normally wouldn’t have that chance, the Tesori Family Foundation will crest over $1.1 million in donations this year.

“Our clinics only cost between $3,500 to $10,000 to put on and our sponsors cover those costs,” Lancaster explained. “So, we make a donation to each First Tee at each city to help keep things going. We don’t want this to only be a one-time thing for our kids.”

“I would have never thought a million dollars was even a number to think about,” Michelle marveled. “I think we had $20,000 as our first-year budget in 2014. Like Bubba Watson said after his second Masters win, ‘I never allowed myself to dream this big.’”

Michelle and Paul’s shared faith runs through all facets of their life. They’ll talk about their faith if you ask, but they’re not preaching 24/7.

Tesori is still a fabulous player, winning at least five Florida Winter Series Mid-Am events and being competitive almost every time he tees it up. His golf career has had a big impact in many ways.

“It’s amazing to see Paul use his golf ability, his gift of being that kind of player and have him understand that that gift was for this, not for him to be a player on the PGA Tour,” said Michelle. “Watching his transformation from his gift for golf to use it for this was far greater than just playing on the PGA Tour, that’s been amazing.”