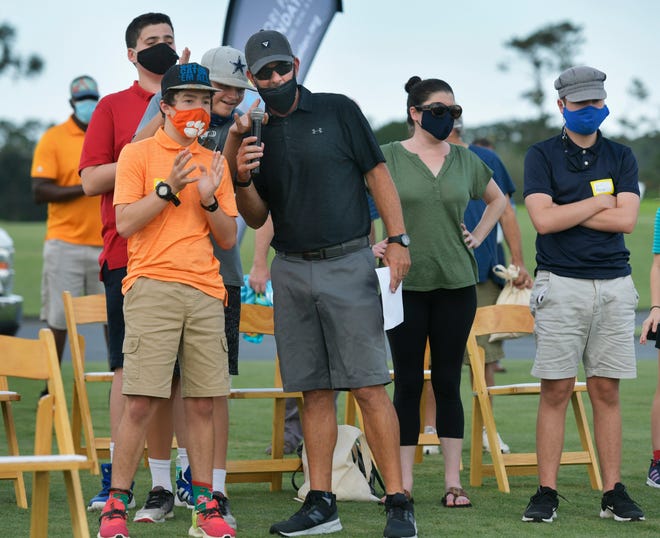 Written by Garry Smits for the Florida Times-Union

Welcome to a Tesori Family Foundation All-Star Golf Clinic — where there’s never any pressure to hit the perfect shot, but there is almost always a perfect smile, whether a kid whiffs or pounds one down the middle.

“These kids do what every golf instructors wants their players to do — be in the moment,” said Paul Tesori, a St. Augustine native and veteran PGA Tour caddie who created the foundation in 2009 with wife Michelle and conducts clinics across the country for special-needs children, as well as providing support for their parents. “They step up and hit it and take enjoyment with every shot. They don’t worry about what just happened or what’s going to happen next. I wish we could all think like that.”

About two dozen special-needs children participated in the latest All-Star Clinic on Monday at the TPC Sawgrass, the fourth the Tesori Foundation has conducted since the COVID-19 pandemic began in March. Before golf was halted for nearly three months because of the pandemic, there had been about 25 clinics per year, either on-site or at nearby courses during the week of PGA Tour events.

The kids were divided into four stations, for putting, chipping, driving and one that seemed to be the most fun — whacking plastic balls at a huge, inflated gorilla.

“I was so happy they were able to hold this clinic and that I was invited back,” said LPGA player Amelia Lewis, who was helping kids at a driving station. “They’re having so much fun. Just to see the smiles on their faces is awesome.”

The last clinic they were able to hold before golf shut down was at the Sawgrass Country Club the day before the first round of The Players Championship. The tournament was canceled after one round and with the suspension of the Tour schedule until early June, the All-Star Clinics also were shelved.

However, they were able to host clinics in Greensboro, N.C., in July and Charlotte and Chicago in August, with the help of First Tee chapters in those areas.

Genna Lancaster, the executive director of the Tesori Family Foundation, said the First Tee provided the blueprint for golf instruction during the COVID-19 era — masks, social distancing, disinfecting golf clubs after use and avoiding physical contact — which the foundation adopted to resume its clinics.

Since First Tee coaches have volunteered to help with the clinics in the past, it was a huge first step in the re-start.

“They were wonderful with the process and proved you could hold the clinics in a safe way,” Lancaster said. “When they started having in-person golf clinics at their chapters, we knew it was time for us to come back and make it happen.”

Tesori said too much work had gone into the clinics since the first one was conducted in 2014 in Greensboro.

“We had a lot of momentum and we didn’t want it to stop,” he said.

Michelle Tesori said the most difficult part is that the volunteers, instructors and foundation staffers have to be careful with physical contact with the children.

“They’re huggers … they love people and they’re used to seeing you, running up and jumping into your arms,” she said.

The Tesoris know this firsthand. Their 6-year-old son, Isaiah, was born with Down syndrome and wants to hug or high-five anyone who gives him so much as a smile.

“Some of the special-needs children, such as Isaiah, have a slightly lower immune system,” Paul Tesori said. “We do the best we can, but they instinctively have this love for people.”

Because of the PGA Tour’s current protocols for conducting tournaments, the foundation hasn’t been able to resume clinics at Tour sites. Tesori said he’s hopeful a clinic can take place next January at the site of the Waste Management Phoenix Open at the TPC Scottsdale.

Michelle Tesori said having a clinic on-site at a Tour event, or during the same week at a nearby facility, increases the public attention “1 million percent.”

“Our Tour partners are so fantastic if we can be there the week of the tournament,” she said. “Their gift to us is they know people in the community who can provide lunches for the kids, gift bags and their media people get the word out.”

The goal before the pandemic hit was to have an all-star clinic the week of every PGA Tour event, more than 40 per calendar year.

Tesori said he, his wife and other adult volunteers at the clinics get more than they give.

“There is a lot of enjoyment in introducing them to golf,” he said. “It’s fun for them to step up and whack a golf ball. We always need to introduce golf to another generation and the special-needs community is one of them.”