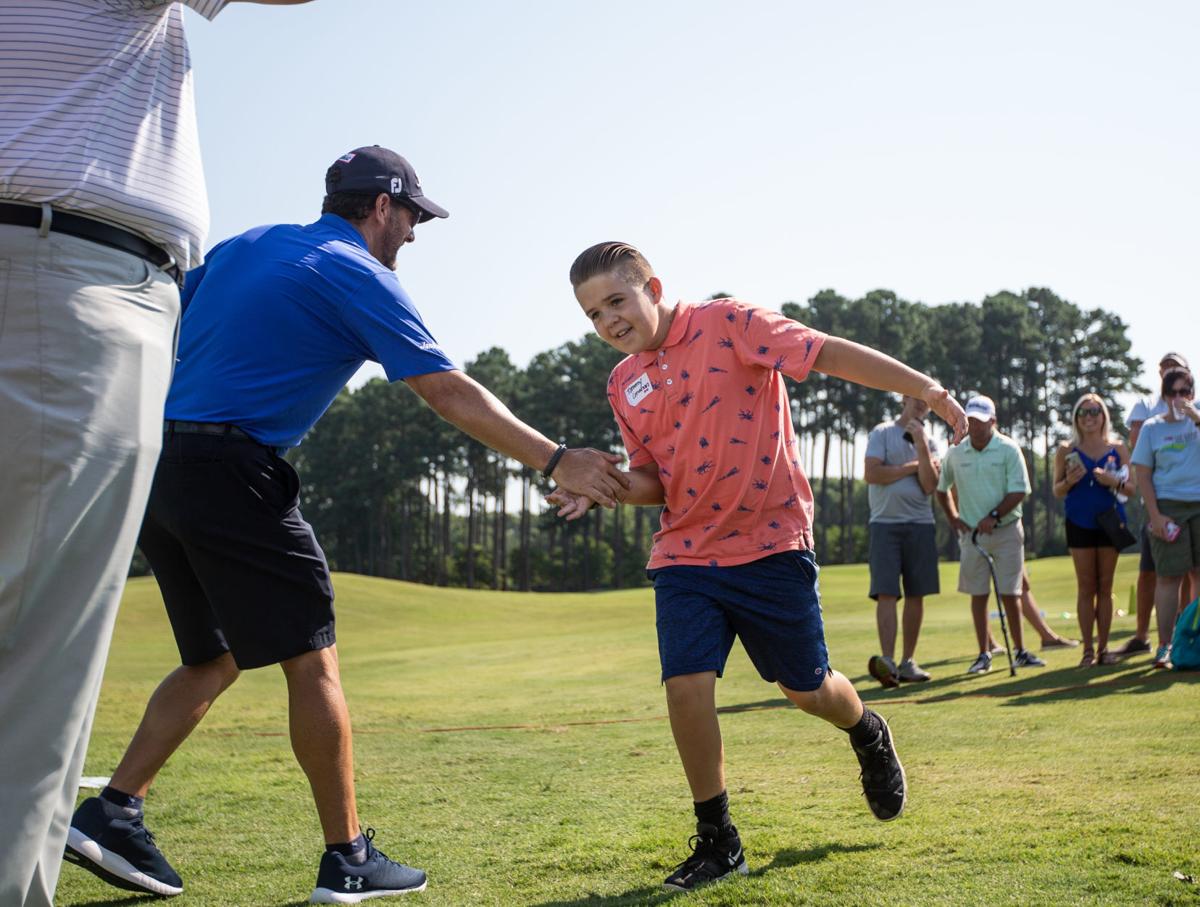 Written by John Bell for the Winston-Salem Journal

“This is a dream I never had.”

For Paul Tesori, the energetic caddie of Webb Simpson, it was the best way for him to describe the journey of a foundation that he and his wife, Michelle, have a lot of passion for.

The All-Star Kids Clinic, which gives children with special needs a chance to enjoy the game of golf, was a big hit Tuesday morning at Grandover Resort’s practice facility. Tesori got help with the clinic from PGA Tour pro Austin Cook and his caddie, Kip Henley.

It was in 2015 when a casual conversation with Mark Brazil, the tournament director of the Wyndham Championship, that the Tesoris decided to organize a golf clinic for children with special needs. From that day on the clinic has grown to a national level.

“We don’t want to give Mark too much credit,” Paul said with a laugh, “but it was him and Michelle who kind of got this thing started and it’s going strong as ever.”

Twenty-five children from all over the Triad took part in the 90-minute clinic on Tuesday, and that scene has played out at various PGA Tour tournaments over the past five years. But next year there will be 20 clinics scheduled and the plan after that is rather ambitious.

“We plan on being at every PGA Tour stop by the year 2024,” Tesori said. “We are so blessed that this has taken off like it has.”

When the Tesoris had their son, Isaiah, it was determined he had Down syndrome. Instead of using that as an excuse, the Tesoris leaned on their strong Christian beliefs and went about the business of establishing the Tesori Family Foundation with the intent to help others.

Michelle is in Ponte Vedra Beach, Fla., this week because Isaiah, 5, is attending a camp. She’s thankful for what the clinic has become and continues to be a driving force behind it.

”I can’t believe God is allowing us to take this thing across the country,” she said in an e-mail.

One reason the clinic was a success in 2015 was the help from the First Tee of the Triad, which helps organize the slew of volunteers. Wyndham also has been generous with donations and this week wrote a $10,000 check to the Tesori Family Foundation.

“This allows us to get kids into our First Tee programs who maybe can’t afford it,” said Mike Barber, the executive director of the First Tee of the Triad. “The special needs kids sometimes don’t leave the house much and to see these kids out here enjoying the game and hearing it’s going national is great.

“Without the dedication of Paul and Michelle and their foundation, none of his happens. There is no more heartwarming thing that we do all year.”

Among the children attending the clinic was Jakob Taylor of High Point, who is 8 years old. His mother, Brittany, said he was up at 4:30 a.m. Tuesday ready to go.

“This is the third time he’s attended this clinic and he couldn’t wait,” Brittany said. “He loves getting coming out here and getting a chance to learn more about golf.”

One addition to the clinic this year is golf gorilla, 15-feet high blown up “Golfrilla” where kids can try and hit plastic golf balls into his mouth for points. Henley, who was using one of Cook’s wedges, got a round of applause after he knocked a ball into the Golfrilla’s mouth on his last shot.

Cook, who is fighting for his job on the PGA Tour as he heads into the final regular-season tournament, says it was a no-brainer for him to help with the clinic.

“What they do is phenomenal,” Cook said. “When I was in college I worked with an organization called 99 Balloons that worked with special needs kids. My wife has a special needs brother so this means a lot to me to come out here and help anyway that we can.”

For T.J. Gerald, a 12-year-old from Kernersville, he loved trying to make some putts at the First Tee of The Triad Putting Zoo on the practice green.

Gerald’s sister, Giavonni, said seeing the joy in her brother’s face is so worthwhile.

“It’s something he loves doing and it’s so wonderful that this clinic is here,” Gianonni said.

Tommy Conahan, who is 12 and goes to Northern Guilford Middle School, plans to tryout for the golf team this year. While growing up, his mother, Tammi, said he tried playing team sports, but once he started in the First Tee of the Triad at Greensboro National, he was hooked on golf.

“I can’t say enough about what the First Tee did for him,” Tammi said. “Golf has drawn him out to where he’s more engaging, and it’s something he talks about all the time. His favorite player is Billy Horschel, who he met for the first time a couple of years ago at this clinic.”

Tesori made sure to stop by and talk with each and every kid at the clinic. And he tried to convey a message to them and their parents.

“We are about having fun with the clinic,” he said. “This is about serving the kids and their families and seeing the joy in their eyes with hitting a golf shot or just learning something new. That’s what we’ve tried to do through the years.”

Tesori said he finds it hard to believe that next year, the clinics will be in 20 cities throughout the PGA Tour schedule.

“Our biggest thing is to raise the awareness of these kids with special needs because they aren’t broken,” Tesori said. “They are a little different with the challenges they face on a daily basis. They might look different but they can be successful and they are All-Stars.”