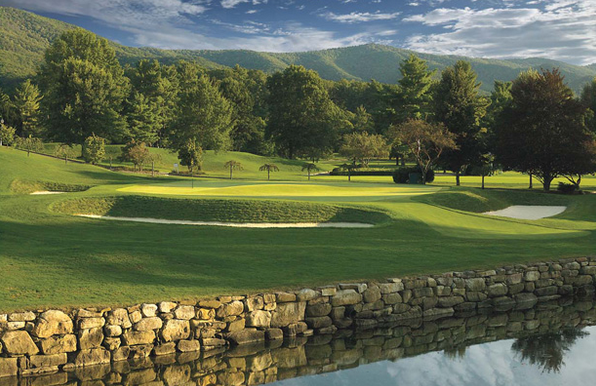 We had a much needed off week after the US Open.  The week off was full of recovery after the beat down Pinehurst put on Webb and I, but we are ready to get to work in England!

We started at Congressional CC just outside of DC in Bethesda, MD. Quicken Loans is the new sponsor, and Tiger made his much anticipated return. The course played like a US Open from start to finish.  Justin Rose won with a score of -4.  We finished 30th but felt much better.  We
battled hard to make the cut and moved up over 30 spots on the weekend.

We were last at The Greenbrier Resort in White Sulphur Springs, WV.   We got paired with Ryder Cup Captain Tom Watson and Keegan Bradley the 1st two days.  It was unreal to be out with Mr. Watson and watch a legend up close.   Webb and I thought we missed the cut after rounds of 71-69.  We flew to his home in Charlotte with his family.  When we
landed, we realized that the cut had moved 11 places and that we made the cut at T69th.  What???????  Really??????  You heard it correctly. Well, we rented a car and drove the 4 hours back to the Tournament, arriving around Midnight.  36 holes and two rounds of 67-63 later, we wound up third feeling as if we’d won the lottery.

We’d like to pray for The Greenbrier runner up George McNeil who lost his sister on the Sunday of the last round.  He was courageous and fired a 61.

Thank you all for the continuous encouragement & prayers for our play this week at the British Open.