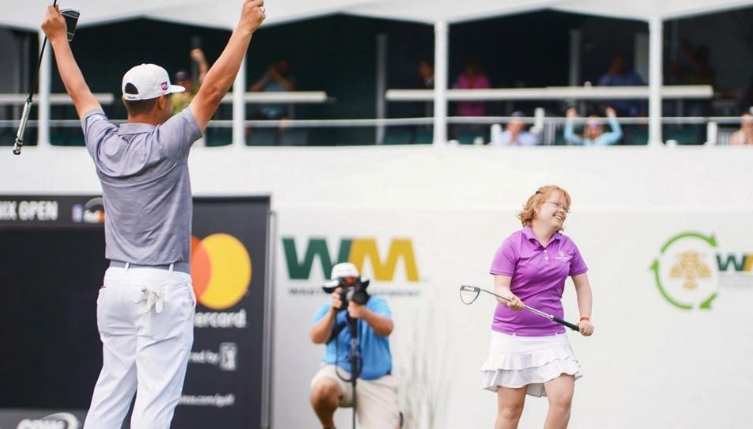 Written by Gary Smits for The Florida Times-Union

The FaceTime video of U.S. Open champion Gary Woodland being congratulated after the final round at Pebble Beach by Amy Bockerstette, a special-needs college golfer from Arizona, had a First Coast connection in more ways than one.

Amy was sitting in the home of Paul and Michelle Tesori of Nocatee while she was talking to Woodland.

“It was just one of those things that happen,” said Michelle Tesori, whose husband is the caddie for 2018 Players champion and 2012 U.S. Open champion Webb Simpson.

The visit was part of a whirlwind weekend on the First Coast for Amy and her family, beginning in Palm Coast and ending on Monday with a visit to PGA Tour headquarters.

The seeds of the meeting, in which one mother of a child with Down syndrome wanted to meet another mother in the same situation, were sown last January when Michelle Tesori was one of millions of people who watched the heart-warming video of 20-year-old Amy playing the par-3 16th hole at the TPC Scottsdale with Woodland and Matt Kuchar during a practice round at the Waste Management Phoenix Open.

Amy was one of a group of Special Olympic athletes from the area who got a chance to meet Tour players. Since she is believed to be the first athlete with Down syndrome to receive a college golf scholarship, to Paradise Valley Community College in Phoenix, she got to play the hole.

Encouraged at every step by Woodland and Kuchar, she hit her tee shot into a bunker, blasted out and made a 10-foot putt for par, all the way repeating her now-famous mantra, “you’ve got this.”

And when Amy dropped her putt after Woodland helped her with the read, the fans in attendance gave her a loud ovation, to which she innocently responded to her father Joe: “they love me.”

How could they not?

The video grabbed Michelle Tesori’s heart in a personal way. She and her husband are the parents of a child with Down syndrome, 5-year-old Isaiah, and have established the Tesori Family Foundation to assist parents of special-needs children with the challenges of raising them.

Tesori used Facebook to contact Jenny Bockerstette, Amy’s mother, the day after the viral video was posted (it has been viewed more than 33 million times to date, the most of any video posted to pgatour.com in history). She wrote Amy’s mother that she and her husband were good friends with Kuchar’s caddie John Wood (who wrote a song about Isaiah) and how much the moment inspired her.

Tesori expressed the hope that they could talk or meet one day to hear about how she raised Amy.

“Millions of people were inspired by that video but it really hit home for thousands of parents with special-needs children,” Michelle Tesori said. “I really wanted to meet Amy and her parents one day and talk to them about their journey.”

Jenny Bockerstette returned the Facebook message the next day and over the next few months they corresponded frequently.

The chance to meet came when Golfweek named Amy’s father Joe its “Golf Father of the Year,” and invited his family to Palm Coast for a banquet last weekend. Tesori got a phone call from the Bockerstettes about a month ago with a request to meet for dinner on Sunday after a round of golf at Dye’s Valley.

Then Gary Woodland seized control of the U.S. Open. The Bockerstettes knew Amy would want to be glued to a TV set to watch her friend but thought a quieter setting than a restaurant would be better.

They called Tesori and had a request: could they watch the U.S. Open at her home?

“Jenny said she didn’t want to impose,” Tesori said. “I told her, ‘are you kidding? Of course you can come over.’”

Take-out food was arranged and they arrived shortly before 6:30 p.m., after Woodland had been on the course for an hour.

“Michelle was just fabulous helping us navigate the entire night,” Joe Bockerstette said. “What was supposed to be a meeting between two mothers turned into a U.S. Open watch party.”

Tesori and Amy hit it off right away, to the point where Amy insisted Michelle sit by her the entire time.

“She is an amazing young woman,” Tesori said. “She is smart, composed, confident … just incredible.”

“There were a lot of hugs that night between those two,” Tesori said.

In the meantime, Michelle Tesori used her contacts within the PGA Tour to let them know Amy was at her house. After Woodland closed out the victory, a PGA Tour communications officials arranged the FaceTime call. Tesori and Amy practiced by calling her husband, who was waiting for his flight home in San Francisco.

She then made the connection with Woodland during his post-round news conference, using Tesori’s tablet.

“It was an amazing moment,” Tesori said. “She is such an inspiration to everyone.”

Woodland said during his post-round news conference that his friendship with Amy has “meant everything for me.”

“The world needs more of her in it,” he said. “Her attitude, her love for life, love for the game and her positive energy is so contagious.”

The Bockerstettes visited PGA Tour headquarters the next day, where Amy met Commissioner Jay Monahan, signed autographs and posed for pictures. The family then flew to New York on Tuesday to appear on NBC’s “Today Show.”

Woodland then got his chance to spring his own little surprise. Several minutes into the interview with Amy and her father, Woodland came from backstage, holding the U.S. Open Trophy.

Amy smiled and gave her friend a hug. She sat back down cradling the huge trophy.

“We won that together,” Woodland told Amy.

Joe Bockerstette said the 2 1/2-minute video has affected more than just Amy’s life — although he said his daughter hasn’t changed all that much with her rock-star status, except for being more and more at east with interviews and photo sessions.

“It’s so amazing what’s happened since then,” he said. “I can’t tell you how many people have connected with us after they saw the video to tell us how much it means to them. And for parents of Down syndrome children like Michelle and Paul, it shows the opportunity and hope. No one ever considered the fact that a Down syndrome kid could play a college sport. It was never on the table until Amy. Now someone’s out telling them, ‘you’ve got this.’”

Categories: NEWS
Here’s how Amy Bockerstette wound up at Paul and Michelle Tesori’s house to watch her favorite player — Gary Woodland — win the U.S. Open
The inside story on how Amy watched Woodland’s win at Tesori family’s home