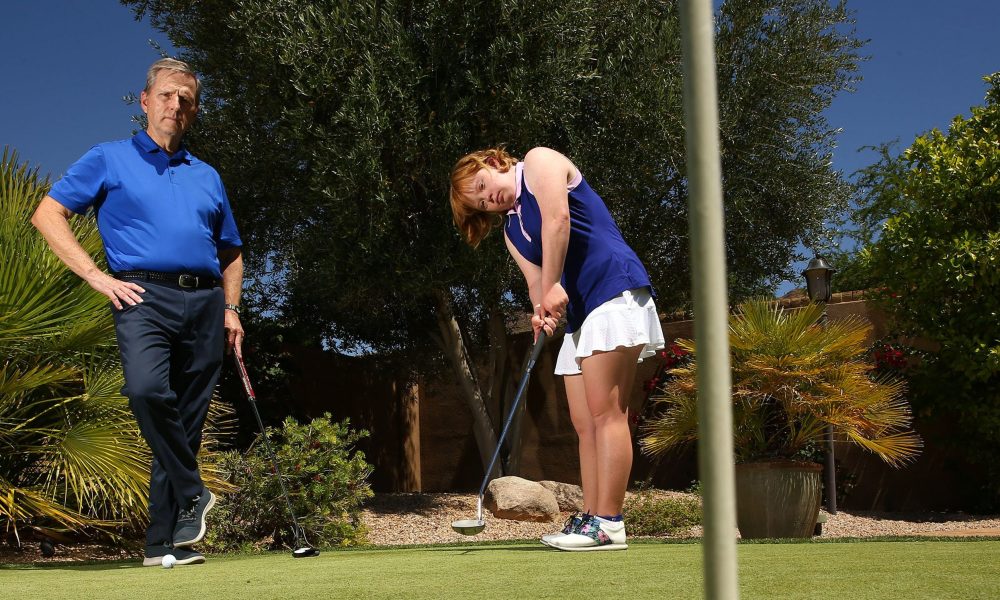 By now, most know the Amy Bockerstette story.

The college golfer captured the hearts of sports fans when she made par on the par-3 16th hole during a practice round of the Waste Management Phoenix Open in January with her father, Joe, and “best friend” Gary Woodland by her side.

But Amy’s influence is greater than a viral video that fades with time. To Michelle Tesori, co-founder of the Tesori Family Foundationwhich ministers to families in need and children with special needs, Amy’s story provides hope that people who have Down syndrome are approaching a time when they will no longer be automatically limited on what they can achieve because of an extra chromosome.

“I can’t wait for the day when someone with Down syndrome playing golf is not so novel that there’s a video and people are like, ‘Oh my goodness,’…  I also hope for the day when we see something like that happen and we go, ‘Of course she did,’ instead of, ‘Did you see that?’ ” Tesori said.

Tesori sees society nearing that point and said that’s largely thanks to people like Woodland, who has referred to his relationship with Amyas a friendship, not built on sympathy, but on respect because of her talent and character.

Amy’s parents, Joe and Jenny, have also been a major factor in her successes because they supported her golf career on the high school and collegiate level at Paradise Valley Community College in Phoenix, Ariz., when there were no examples of a high school or collegiate golfer with Down syndrome. They chose for Amy to pursue what she loved, and for her to be seen, publicly discussing her achievements the past few months.

Being visible through media coverage has allowed people around the world to see that yes, Amy has Down syndrome and yes, she is pursuing golf on a high level — something Tesori said she hadn’t seen to this extent.

Tesori, 43, thinks this is because many in her generation did not grow up in proximity to peers who had Down syndrome. She said she had two friends with Down syndrome in school, but they were placed in separate classes. Due to this separation, Tesori said she has spoken to several adults who were surprised when they saw Amy’s video because they didn’t know someone with Down syndrome could play golf.

That unnecessary, sometimes unconscious, limitation placed on people with Down syndrome is something Tesori and her husband Paul, like Amy’s parents, were confronted with when they learned their son Isaiah, now 5, was born with Down syndrome in 2014.

“We did talk about, ‘What if Paul never gets a chance to golf with his son?’ Again, ignorance,” Michelle said. “We had no idea because no exposure. We had those conversations, ‘Do kids with Down syndrome golf? Are they athletes?’ The exact same thoughts.”

Paul caddies for Webb Simpson on the PGA Tour and played professional golf in the late 1990s.

People with Down syndrome are sometimes perceived as being weaker than someone who was born with 46 chromosomes. Looking at Amy and Isaiah specifically, Tesori said the extra chromosome didn’t create weakness, but rather a strength.

“The thing that tugs at the heart of the man is this burning question of are we good enough? … It struck me the thing that I realized in watching Amy‘s video that was so compelling to me was that God has given our children a gift of never wondering if they’re good enough … Our job is to protect who God made (Isaiah) to be: a child filled with joy and love. Joy explodes out of our kid and it explodes out of Amy and that’s what people saw.”

Anyone who watched Amy at the Phoenix Open knows she’s filled with excitement and she does not lack confidence. Even with a large crowd and cameras watching, Amy knew she could keep up with the pros. And she did.

“I think the thing that’s most compelling about Amy are those three sentences that she said (in the video),” Tesori said. “Gary planned to pick that ball up out at the bunker for her and she said, ‘No, I got this.’ Then she’s standing in the bunker about to hit the shot and then she’s standing over the putt. In both cases, she says, ‘You’ve got this,’ to herself. And then the crowd goes nuts and she turns to Gary and goes, ‘They love me.’ …

“I think that’s the thing that’s most compelling about her. It was this thing where people went, ‘Really, she’s got this? I don’t think I would’ve had it.’ And she was sure of it. Absolutely certain.”

Watching how certain Amy is as she steps on the golf course, it’s easy to see how she’s proving to the sports world she and a generation of athletes just like her are capable of achieving anything, on and off the course.

“What you learn as a parent of a child with Down syndrome is you should never limit anyone. Who are we to decide what someone’s capable of?” Tesori said. “And we do it all the time. We’re all guilty of it. And it just so happens the thing people think limits or defines (Isaiah and Amy) is an extra chromosome.”

Clearly that extra chromosome has been given too much credit.