MADE THE CUT! And a little skipping… 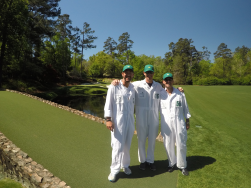 Here we are Friday evening at The Masters. We had a rough day yesterday with a 5 over par 77. This game can be extremely frustrating at times. Today, however, was a comeback that could kick-start the remainder of the year. We birdied the last two holes at Augusta National to make the cut and give us a shot at a strong weekend. Interestingly enough, both our wives called it – when Michelle arrived at the course today, she sought me out to the left of 2 green and grabbed me and said “When you leave the course today, I want you to come home and say ‘my boy sacked up today’. So go make that happen!” Then, sitting at 7 over par, with the cut appearing to likely be 5 over, Dowd predicted we’d make a huge comeback with our final redemption coming on the 18th hole where we’ve struggled here consistently in the past to even make par. How about that? Both our wives were dead on.

And maybe you heard, but Webb made the first hole-in-one at the Par 3 Contest on Wednesday here at The Masters. Haven’t seen it? Click here to see the video of not only his, but all 9 record-setting hole-in-ones!. Unfortunately this particular video doesn’t capture his vertical leap celebration which was epic but it’s all over twitter. You might want to check it out. My man is THE man. So stinking happy for him and for Teddy Kiegiel, his former golf coach, who was on the bag for the Par 3.

Not only did we make the cut to stay for the weekend for our second year in a row and our third time as a team, this also means I get to log even more miles for the A Mile In My Shoes campaign. I’d like to give a huge shout out to Darrah Shaefer (Chairman of the Board for the Fore!Kids Foundation which runs the Zurich Classic), and our friends Bill Rodish, Chad James and Robert Gefaell who all pledged to the campaign this Masters week. We are so excited about our programs for kids with special needs, and particularly excited to be expanding our All-Star Kids Clinic to our hometown of Ponte Vedra Beach during The PLAYERS Championship in a few weeks.

A little fun side story… this Tuesday, we played a practice round at Augusta National with good friend Bubba Watson and JB Holmes. Bubba’s caddie, Teddy and I are close friends. We’ve played a bunch of golf together at various caddie events throughout the years. Even so, when Webb, Bubba and JB called on us to collectively hit off the water (skipping the ball is part of the fun!) on the 16th hole at Augusta National, I tried to escape without being noticed. The crowd wasn’t having it. Check out the two videos below: first, the video of the awesome crowd encouraging me to come back and second, of our shots. Incredible memories with incredible friends. Won’t ever forget it.

Caddie Skippin’ on 16 – Can’t Escape The Crowd! from Tesori Family Foundation on Vimeo.

Caddie Skippin' at 16 from Tesori Family Foundation on Vimeo.

This year so far has been disappointing but both Webb and I know the game is extremely close to being very good. I want to thank everyone for the support and encouragement that continues to be sent to me via text, email and twitter. We are so thankful for every opportunity we have to tee it up and hope to see the golf scores reflect the amount of work being put in SOON!

Categories: PAUL'S JOURNAL
Start With Love
At The Masters with Paul & Michelle Tesori